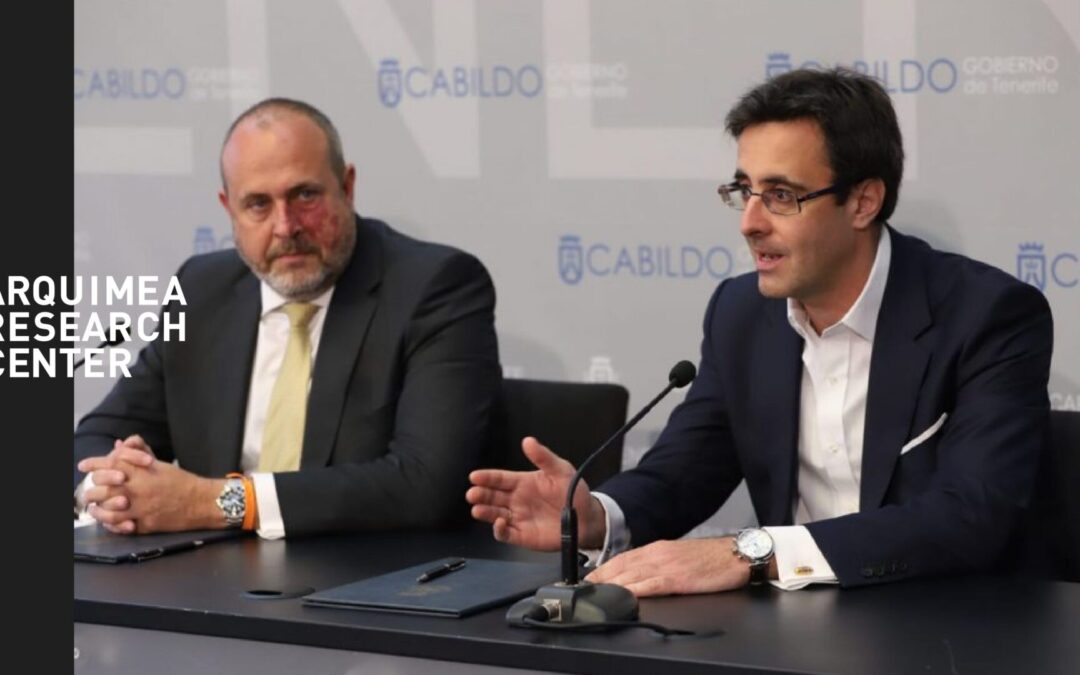 Enrique Arriaga, Island Council of Tenerife’s first Vicepresident and Innovation Counsellor, and Diego Fernández, Presient of ARQUIMEA, signed earlier today the collaboration agreement through which the company will settle in Nanotec, inside the Scientific and Technology Park INtech Tenerife, under the name of ARQUIMEA Research Center.
Nanotec will host a private research and development center that will be strategic for the technology group, and taht has over 15 years of experience in the development of multidisciplinary technologies. The center will open numerous research lines, the most important of which are electronics and microelectronics; photonics; robotics and mechanisms; or circular economy and sustainability. ARQUIMEA exports technology from different sectors to several countries in the activity áreas of space, biotechnology or healthcare, amongst others.

Enrique Arriaga underlined the importance of this agreement, with which “we finally kisckstart Nanotec, one of the technology centers of INtech Tenerife, located in La Laguna. ARQUIMEA is a very improtant technology company to whom we have been able to offer high-level facilities, fit for its objectives of research and lab”. Arriaga showed his satisfaction about seeing fulfilled the goa lof “promoting not only the creation of technology companies in the island, but also of attracting companies of this sector to our facilities in order to create an R&D and innovation companies ecosystem in Tenerife”.

Diego Fernández explained that for two years now the Grou had been looking for a location to créate a corporate R&D center, with very specific conditions that, finally, they found in the Science and Technology Park of Tenerife. It is, as he puti t, a strategic investment for the company and a long-term bet for which they will need to créate around 150 highly-qualified jobs.

“We chose Tenerife for several reasons and, amongst them, it has been of special importance that it has a university, the La Laguna University, with which we are currently working and on the same wavelength, as we need highly educated professionals and La Laguna can help us with that. But the exceptional facilities that the Island Council of Tenerife offered us have also been of critical importance. There is not any building like Nanotec in al lof Spain, with all the tolos we need at out disposal”, assured ARQUIMEA’s President.

The island’s Innovation Counsellor reminded attendants that Nanotec is designed to host nanotechnology and environment and sustainability labs. “We have facilities, tax incentives and optimal conditions for enabling Tenerife to become an attractive place for the settlement of innovative companies, as wel as for attracting talent”, he underlined.

The Canary Islands have a great potential for becoming the California of Europe. Ours is a decided bet. The profiles we are demanding are recent graduates and PhDs. The dispersed talent with Canarian origin is wide, and bringing them back to Tenerif eis also an opportunity. We have a 4-year plan, with which we want to create 150 jobs. In the next months, 25 researchers will already be actively working with us.
Diego Fernández, President of ARQUIMEA.

The new center – named ARQUIMEA Research Center– is born with the objective of boosting the technological capacities of the different companies that integrate ARQUIMEA. The center has already signed several agreements with the main education institutions in the islands, like La Laguna University. With said agreements, we establish lines of joint action with them and their researchers and doctors for fostering employment, research and innovation in the Canary Islands.