The H2020 REACT (REsettable Hold-Down and Release ACTuator) project, funded by the European Commission under the Horizon 2020 program aims to reduce the dependence from non‐European sources on a critical space technology like non-explosive hold-down & release actuators (HDRAs). The project addressed the development and In-Orbit Demonstration (IOD) of the ARQUIMEA’S field-resettable HDRA, so-called REACT, that uses Shape Memory Alloys (SMA) as trigger mechanism.

ARQUIMEA led a team of seven partners involving research organizations, space prime contractors and system developers acting as end users of the REACT and validating the actuator in different systems. The project team was formed by:

The project aimed to develop and qualify to TRL8 a complete family of HDRAs, consisting of three different sizes (5KN, 15KN and 35KN) and two operation temperature ranges (up to +65C and up to +125C). Later, the actuators would be validated in different real systems, followed by a flight mission to demonstrate the technology in orbit. Thus, the main challenge was clearly to meet these demanding goals in due time and form.

On top of that, many technical endeavours were faced during the implementation. The REACT was to be the first space-qualified actuator using high-temperature SMAs, which added great complexity to the design and development. Special attention had to be paid to the heating system and electrical interfaces, as the actuation of the trigger is enabled by a temperature change in the SMA caused by an electrical pulse. The device tribology, lubrication, motorization and reliability were also key issues that had to be dealt with.

The mechanical and electrical interfaces, actuation time, compact dimensions, envelope, and synchronized actuation of several REACTs were also relevant for each one of the system applications addressed in the project.

Finally, the coordination of a European consortium in such innovative project where no formal guideline is settled for these new type of development and where each entity has its own way of proceeding and own experience, required important communication efforts, technical background and market analysis, as well as power of persuasion to adopt the best compromises during the implementation.

ARQUIMEA developed and qualified three different devices according to their size and hold-down load: 5 KN, 15 KN and 35KN. For each device, there is a version for operation in a temperature range up to +65C and another one that can reach up to +125C.

In parallel to the REACT undertaking, the industrial partners developed different real systems that used the REACT as enabling technology. All the systems were validated at lab level under relevant conditions.

The project initially foresaw an IOD mission consisting of an experiment at the ISS. Finally, it was decided to prove the technology in an actual flight mission, where several units the REACT 5KN were used for the release of the solar panels for a telecom application satellite (confidential customer). Thus, the technology has successfully reached TRL9.

The development of a complex product like the REACT based on high-temperature SMA relies not only on its implementation (trade-off between conventional pyro HDRAs and its performances) but also on a good understanding of the requirements of the different target applications and related market. The involvement of the European Commission and the industrial as well as the key technology partners enabled the adoption of real objectives and were critical for the final success of the project. 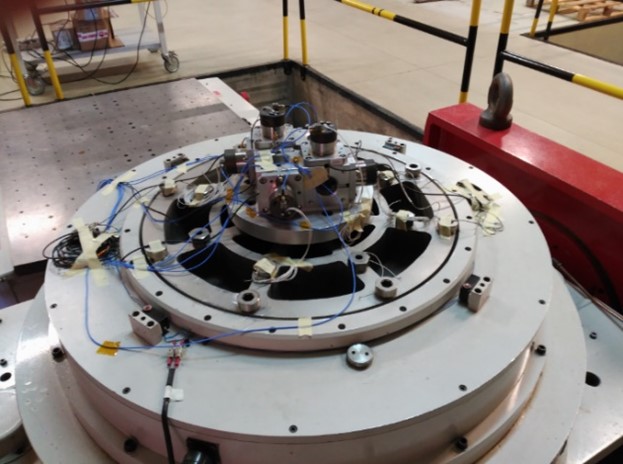